Why We Have Stained Glass

Many of you have probably wondered, as I did when I started coming to First Parish, why a Unitarian-Universalist Church has so much stained glass. I tended to associate stained glass windows with orthodox Christian Churches, and for many years assumed that we acquired these windows at a time when this Congregation was more Trinitarian than Unitarian. It turns out that the story behind our stained glass windows is more complicated than that. 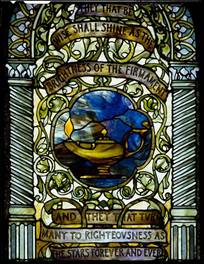 As an institution, First Parish is almost 300 years old. But this Sanctuary, the fourth in which our Congregation has met, was built in 1893, during what is known as the Arts-and-Crafts era. One major cultural focus of this era was stained glass, which was used to decorate almost everything from the White House to corporate headquarters to churches and temples to table lamps. In other words, stained glass was created to particular specifications to serve many varying purposes. The windows created for our Sanctuary were designed for what was then a Unitarian Church, and differed markedly from windows created by the same makers at the same time for Christian Churches.

The stained glass revival and the broader Arts-and-Crafts movement emerged in the mid-nineteenth century in Europe and the United States in response to growing concerns about standardization and mass production. Opponents of the dehumanizing effects of “dark Satanic mills” started popularizing contrasting aspects of the Middle Ages. This Neo-Medievalist movement is commonly associated in England with the novelist Sir Walter Scott and the designer William Morris and in the United States with Brookline’s own H. H. Richardson, the greatest architect of the time, and whose firm designed our Sanctuary, only a few years after Richardson’s death in 1886. Some nineteenth century medieval enthusiasts fell in love with everything about the Middle Ages, including the stained glass of Mont Saint Michel and Chartres Cathedral, the poetry of Dante and the theology of Thomas Aquinas – and converted to Catholicism. Others were more selective. Even a staunch New England Unitarian could endorse the Sir Galahad legend, depicted here in our Sanctuary, because, as Tennyson put it in non-sectarian language, Sir Galahad’s “strength was as the strength of ten because his heart was pure.”

Public-minded New England enthusiasts of Arts-and-Crafts wanted all people, even if living and working in dreary surroundings, to have their lives enriched and their spirits uplifted by visits to beautiful “cathedrals of the spirit” that would function rather like medieval European cathedrals, but without their theological ramifications. The men and women responsible for First Parish’s stained glass windows were motivated by such social and aesthetic concerns, and not by orthodox Christian theology. 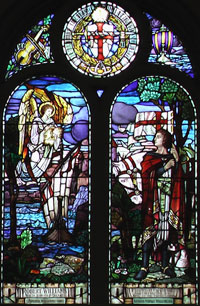 What Makes Our Windows Distinctive

It was not until I started systematically comparing our Windows to those in other Churches, such as H. H. Richardson’s Episcopalian Trinity Church in Boston’s Copley Square, that I became aware that our Windows are definitely not doctrinally Christian, at least as Christian doctrine is understood by orthodox Trinitarians. This becomes clear when we look at the way themes and symbols associated with the Judeo-Christian tradition are portrayed. For example, our Richardsonian Sanctuary and Boston’s Richardsonian Trinity Church both have windows depicting Mary Magdalene on Easter Morning at the empty tomb of Jesus. Ours shows only Mary Magdalene and an Angel trying to explain to her why Jesus is no longer in the tomb. In other words, our window focuses on Mary Magdalene’s confusion. In Trinity’s window, the figure of Mary Magdalene is dwarfed by the visible figure of Jesus hovering in the air above her and displaying his nail-pierced hands, vivid enough proof of the Angel’s story even for Doubting Thomas.

If we look at our other Christian-themed Windows, we find that one shows Jesus instructing young children, and thus as a positive role model for any adult. We also have a portrayal of the Birth of Jesus, which can be viewed as a celebration of the universal joy and wonder of birth. Finally, our Dorcas Window depicts an early Christian leader as a nurturant woman surrounded by children as she works on embroidery. All of these windows emphasize links between Christian stories and their broader interpretive or metaphoric connotations. And none contains the Chi-Ro symbol so prevalent in Christian churches, identifying Jesus as the Messiah or Christ. 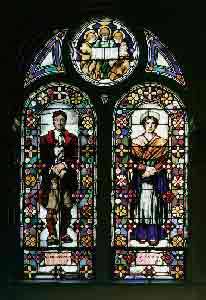 Some windows in our Sanctuary are overtly secular. Among these can be counted our Goddard Window, celebrating two of Brookline’s Revolutionary War heroes, John and Hannah Goddard, and our World War One Memorial Rose Window at the rear of the Sanctuary. This Window commemorates everyone, including a foreign student at M.I.T., who ever lived in Brookline and died serving their respective countries in World War One. The Window contains words written by the pre-Christian Roman poet Horace, “Dulce et decorum est pro patria mori” which can be translated as “It is gratifying and appropriate to die for one’s country.” (Horace Odes 3:2:13) Our great War Memorial Window is both non-sectarian and non-partisan. It commemorates sacrifice in war, but does not glorify war and certainly does not take sides in any particular war. On this Memorial Day Sunday, when we again find ourselves in the midst of a war about which people have decidedly mixed feelings, we can appreciate with peculiar intensity the fact that our predecessors were honoring the individual sacrifices made by patriots, and not war itself.

Quite a few of our windows portray angels. But while we may associate angels with Christianity, angels are also prominent in pagan Greek, Islamic, Hindu, and Buddhist traditions. Most revealingly, our biggest angel is Pax, or Peace, a concept surely not exclusive to Christianity. Our Peace Angel was installed in 1896, just prior to the Spanish-American War. Before setting off for Cuba with his Rough Riders, Theodore Roosevelt could in theory have seen our Peace Angel while visiting his in-laws in Brookline; he had been married to a Brookline native in 1880 in First Parish’s preceding Meeting House.

I could go on. But I hope I’ve said enough to convince you that the Congregation that installed these windows is not that far removed from our Congregation today. Our windows do not constrain us to accept any particular theological propositions. Rather, they remind us that religious speculation has a long history, while they simultaneously seek to inspire us to do our own speculating at the highest level of which we are capable.

More information about the Stained Glass Windows at First Parish in Brookline:

Layout of the windows

Detailed Guide to the Stained Glass at First Parish

Rev. Jim Sherblom’s sermon from May 27, 2007: Seeing Through Windows

Reflections on a Design by Sarah Wyman Whitman by David Gehring, University of Wisconsin-Madison