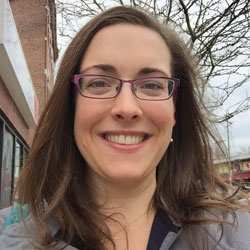 Elizabeth McIntire, Soprano, graduated with her M.M. in Vocal Performance from New England Conservatory in May 2008. She received her B.A. in Theatre from Smith College and spent a year studying acting at the British American Drama Academy. Elizabeth has been seen onstage as Second Woodsprite in The Diva Day Foundation’s Rusalka, Hero in NEC’s Egisto, Meg in Intermezzo Opera Festival’s Falstaff, and Ms. Lavender-Gas in NEC Outreach’s Help! Help! The Globolinks! She is the Outreach Chair of the Diva Day Foundation. Elizabeth is a Brain Integration practitioner at WholeBody Solutions in Quincy, MA and also has a private practice doing Brain Integration in Jamaica Plain. 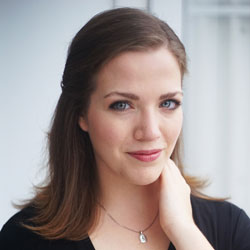 Emily Wheeler is a Mezzo from Springfield, IL. She holds a Master of Arts in Voice and Opera (’19) from the Universiry of Iowa. While at Iowa, she served as a Graduate Assistant in the voice department, teaching undergraduate voice students. She also sang the role of “Dorabella” in Mozart’s Cosi Fan Tutte with the U Iowa Opera Theatre. She received her Bachelor’s degree from Millikin University in Decatur, IL where she was active in the many choirs and ensembles of the small university. In addition to her work in the classical realm, Emily has an extensive background in musical theatre and contemporary music, with a deep love for folk and bluegrass. Most recently, Emily has shared the stage with Kristin Chenoweth in her 2019 NYE performance at Hancher Auditorium in Iowa City, toured eastern Iowa at Christmastime in McDonough’s Holiday Grande as a singer/dancer, and played “Mother” in Ragtime at the American Gothic Performing Arts Festival in June, 2018. She looks forward to taking full advantage of the thriving music scene here in Boston. 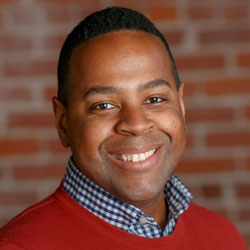 Tenor Adrian Jones has been with First Parish in Brookline since 2008. Since moving to Boston in 2007, Adrian has been seen on stage and in concert with many companies in the area, including Opera Boston, Boston Opera Collaborative, Commonwealth Opera, NEC Opera Theatre, Opera Providence, and Choral Art Society of the South Shore. He holds a Bachelor of Music degree from Otterbein College and a Master of Music degree from the New England Conservatory. 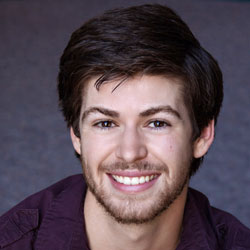 Aaron Rochelle Newell is a Lyric Tenor specializing in German repertoire. His performance experience includes musical theatre, opera, choral and solo recital, and dance. Newell has made a particular effort to learn and perform music from a wide range of experiences, including the work of female composers, Negro spirituals, and non-Western music. Newell also premiered the original composition “Night Train” by Sonja Larson, a song set based on poetry written by Larson following a trip to Dachau concentration camp. Newell recieved a bachelor vocal performance and vocal pedagogy degree from Viterbo University in Wisconsin, and a graduate voice performance degree from the Boston Conservatory under Robert Honeysucker and Michael Strauss. He has performed and studied internationally with Yacchad Choral Community in Poland, a multi-cultural musical exchange program supported by the Fulbright Institute, and the International Performing Arts Institute in Bavaria, Germany.

Back to Music Page