History of First Parish in Brookline

This congregation began in the early 18th century. In 1717, a meeting house was built at the center of Brookline, known then as Muddy River. The patch of lawn that today splits Walnut and Warren Streets was the original town green. Our Sanctuary, dedicated in 1893, is the fourth to house the congregation that began as The Church of Christ, a Christian church in Puritan New England, and evolved into the First Parish in Brookline, a member congregation of the Unitarian Universalist Association.

Many churches in New England separated into Unitarian and Congregational churches during the Unitarian Controversy in the early 19th century. But First Parish retained both groups in the Unitarian vs. Trinitarian struggle and stood strong as a community church embracing both Christian traditions and the theology and liberal inclusiveness of the Unitarian faith. To this day it honors the history and the tradition, but is firmly implanted in the Unitarian Universalist spirit of openness to all religious wisdom and practice. 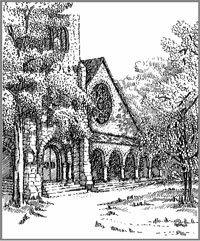 First Parish has a history of beloved ministers through the centuries. John Pierce shepherded the congregation through the theological controversies of the early 19th century. Frederick Henry Hedge was a late 19th-century transcendentalist scholar for whom the Parsonage (now privately owned) across Walnut Street was built. Howard Brown, a powerful preacher and liturgist, urged the purchase of the town’s original Town Hall, now known as Pierce Hall. The most recent ministers were the Rev. Dr. Maria Cristina Vlassidis Burgoa (Assistant Minister, 2013-2016), the Rev. Dr. Jim Sherblom (2005-2015), the Rev. Martha Niebanck (2005-2012), the Rev. David A. Johnson (1988-2003), the Rev. Michael Boardman (1975-1987), and the Rev. Carl Bihldorf (1942-1975).

Today First Parish is a congregation composed of people of deep conviction, strong faith, and devotion to community involvement. While very proud of our solid and rich history, we are passionately dedicated to responding meaningfully to the world here and now and to spiritually nurturing ourselves and our children for the challenges of the future.

See more information about our building on our Stained Glass page.

In 2013, First Parish began to address the need to arrange and describe its archives. To donate records documenting official business and events of the Parish, contact the Archivist.